Just before the holidays, on December 22, 2011, Louis Vuitton filed suit against Warner Brothers in federal court in New York alleging that the handbag shown in the movie is a fake. 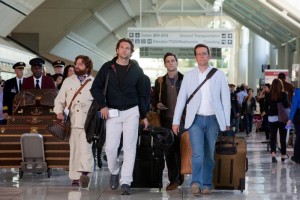 In this scene from The Hangover Part II, Galifianakis is shown on the far left toting his “Louis Vuitton.”

Louis Vuitton is not claiming that the movie used counterfeit goods, but rather that Warner Brothers used a bag made by Diophy Handbags, amounting to “consumer confusion.”   As for Louis Vuitton’s suit against Warner Brothers, the causes of action are trademark dilution, false designation of origin, and unfair competition.  Louis Vuitton seeks to stop the DVD release of the scenes with the fake handbag.  Additionally, they are seeking a share of the profits from the film.

History of the Film’s Run-Ins with the Law

In addition to the most recently filed suit by Louis Vuitton, Warner Brothers has faced three other suits because of the film.  As mentioned above, Mike Tyson’s tattoo artist Victor Whitmill, settled with Warner Brothers for an undisclosed amount in the copyright case over the use of the tattoo in the movie.  Also, in October of 2011, the producers of the film were sued by screenwriter, Michael Alan Rubin.  Rubin alleged that the storyline about a main character traveling from America to Asia to marry his girlfriend was plagiarized from Rubin’s own idea for a comedy.  This suit was later dismissed.  Lastly, the production studio faced a suit from stuntman, Scott McLean, who alleged he suffered brain trauma in an attempt to complete a stunt for the movie.  Warner Brothers settled with the stuntman.

Despite these numerous suits, the movie has managed to gross over $250,000,000 in the U.S. alone.  I suppose that this gross revenue is enough to cover Warner Brothers legal expenses and any amounts that it might settle for with the various plaintiffs.  Not to mention, the Huffington Post reports that these lawsuits have done nothing to deter the making of Hangover III.

What Will Come of the Louis Vuitton Suit?

My prediction for the outcome of this current suit falls in line with Warner Brothers history of settling these suits outside of court.  With the success of The Hangover Part II and the hope for a trilogy, Warner Brothers will want to avoid any defamation to its series of films.  If this suit does go to trial, a court will look to see if Louis Vuitton’s trademark suffered when Galifianakis’ character, Alan, professed that the fake Louis Vuitton handbag was a real one?  It will have to consider that the movie producers may have purposely wanted Alan’s bag to emulate a fake Louis Vuitton’s bag.  When you think about it, the now famous phrase likely would not have been funny if it were a real Louis Vuitton bag.  It is just my opinion, but the suit likely will not even get to the point of a court deciding these things.  What are a few settlement payouts to individuals and companies when Warner Brothers has created arguably the funniest series of movies that our generation has seen?

Katherine DeStefano is a second year law student at Fordham University School of Law. She is originally from Silver Spring, MD and graduated from Georgetown University’s McDonough School of Business in 2010. Katherine enjoys playing basketball and golf, spending time with her family, and cooking.