NFL’s Clean Zones Are Being Dragged Through The Dirt

NFL’s Clean Zones Are Being Dragged Through The Dirt

The Sports Blawg with the Fordham Sports Law Forum

Last weekend, most of the country and much of the world were focused on the Super Bowl.  But this year, the NFL got additional attention for a reason unrelated to the game itself.  In preparation for hosting the Super Bowl, the NFL requires the host city to adopt “clean zone” ordinances.  Within the “clean zone,” a person or company is required to obtain a license from the NFL in order to conduct or promote commercial activity that is in any way related to the Super Bowl.  The clean zone that Fort Worth, Texas enacted for last year’s Super Bowl XLV can be found here.

The clean zones have been challenged in federal court for allegedly violating the First Amendment of the U.S. Constitution.  The extent of protection for commercial speech is unsettled, but the prevailing precedent indicates regulation of commercial speech is valid if it directly advances an important governmental interest and is no more restrictive than necessary.

Constitutional analysis of clean zones is complicated because the ordinances regulate a wide variety of markedly different activities.  The ordinance’s regulation on the sale of merchandise has the strongest justification because of the prevalence of counterfeit NFL merchandise.  The government has an important interest in protecting consumers from being sold unlicensed goods.

At the other end of the spectrum, clean zones prohibit existing restaurants and stores from using advertisements mentioning the Super Bowl.  The ordinance could be seen as protecting consumers from deceptive marketing.  However, this justification is not nearly as strong as the justification for regulating merchandise.  In fact, one would think that local establishments would be remiss if they did not advertise specials because of the influx of visitors the Super Bowl brings to town. 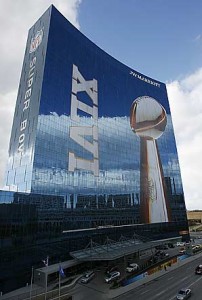 Regardless of the justification, an important part of the constitutional analysis is the structure of the ordinance as a licensing regime instead of an outright ban.  This is important because, logically, the justification for a licensing regime shouldn’t need to be as strong as an outright ban on certain types of speech.  Additionally, the licensing regime provides support for the NFL’s assertion that clean zones are aimed at preventing ambush marketing where vendors show up in an attempt to deceive consumers into thinking the vendor is sponsored by the NFL.  This analysis may turn on how the procedure and requirements for being provided a license.

With the Super Bowl over, the nation will have to tune into one lawsuit’s rapidly approaching trial date and potential appeals, to watch as the NFL attempts to protect its power and profits from those who would capitalize on its massive success.