Unsportsmanlike Conduct: Has the Commissioner Overstepped His Boundary?

Unsportsmanlike Conduct: Has the Commissioner Overstepped His Boundary?

The Sports Blawg with the Fordham Sports Law Forum

With the recent bounty scandal that has overshadowed the National Football League, there has been much scrutiny over the ambiguity surrounding a commissioner’s authority. Eventually, the time will come when we reminisce about Roger Goodell’s tenure as commissioner of the NFL. For some, he will be remembered as the pioneer for player safety, for others he will be remembered as someone who attempted to protect the shield of the NFL, but for many he will be remembered as a dictator of sorts by overstepping his boundaries when he ruled on the bounty scandal. Although many fans and players feel that Goodell stepped outside his jurisdiction, he unquestionably acted within his authority, while also doing great things for the game of football. When looking at the relevant law on the subject, it plainly shows that Goodell did nothing but act within the parameters afforded to him by the Collective Bargaining Agreement and the law.

The Commissioner’s role is not only to uphold the integrity of the game, but public confidence as well.  Courts have ruled that maintaining public confidence in sports is inherent in the duties the Commissioner.  Much like a company’s CEO is required to act in the best interests of its shareholders; the Commissioner is responsible to act in the best interests of all 32 owners.  While opinions vary on what is or is not beneficial for the game of football, the Commissioner certainly has authority to adjudicate based on his determination of “conduct detrimental to the game.” The Commissioner, since taking office in 2006, has put an emphasis on the public image of the NFL. As he stated the day he was appointed, “it is important that the NFL be represented consistently by outstanding people as well as great football players, coaches, and staff. We hold ourselves to higher standards of responsible conduct because of what it means to be part of the National Football League.”

Fans have forgotten the Cincinnati Bengals teams in the early part of the decade, the “love boat scandal of the Vikings, the “purple drank” recipe that led to players’ downfall, and the overall profane behavior on the part of many players. In conjunction with this, Mr. Goodell has also looked to better the day-to-day business of the league, all aspects of planning, and the expenditure of money to further league endeavors. He has successfully revived NFL Europe and has expanded the game of football to London and Canada. The NFL game has also become infinitely more accessible as a result of electronic applications, in-stadium entertainment, and television packages like Sunday Ticket. On October 28th, the NFL will be using pink penalty flags in an effort to further raise breast cancer awareness. There is a clear effort on the part of Mr. Goodell to clean up the image of the once embattled league.

Why then, is Mr. Goodell’s tenure going to be looked at with much skepticism? Unfortunately, because of the recent bounty scandal, many media pundits and fans alike believe he did not act within the scope afforded to him as Commissioner. The world seemed to be “up in arms” over the recent suspensions of four Saints players and two coaches. In fact, however, Goodell acted well within his jurisdiction and was right to assign such a harsh penalty as long as it was supported by evidence. Among the questions that needed to be examined was whether or not a “pay to injure” system was a) implemented and b) was conduct detrimental to the game of football. Although in previous cases the Commissioner punished players for conduct detrimental to the game of football, the bounty scandal was essentially the first time a player was being suspended for an extended period of time for on the field conduct as opposed to off the field conduct that was detrimental to the game. In the aforementioned cases, both courts ruled that it would be unwise to disturb the authority of the Commissioner. Judges were loathsome to overturn Commissioners’ decisions based on conduct viewed threatening to the integrity of the game. If a pay to injure system was in place, it is certainly detrimental to the integrity of the game. 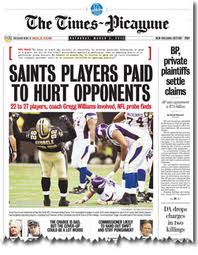 This week in motions filed with the Court, the NFLPA cited a reward-based system that was implemented in the early part of the 1990’s and went unpunished. The argument centers on the fact that such a system is unincorporated in the CBA. What this argument misses, however, is that such behavior can be deemed conduct detrimental and would fall under the Commissioner’s exclusive authority anyway. The mention of such a system in the NFLPA motion seems to imply the Saints had a system in place as well, to what extent is the question. The Court will have to examine whether or not the system in the early 1990’s was a pay with intent to injure system like the NFL alleges the Saints took part in.

Recently, Mr. Goodell recused himself to ensure that he lives by the standard of upholding integrity. Goodell’s predecessor and replacement to hear the arbitration of the players, Paul Tagliabue, might be required to recuse himself because of his position at Covington Burling, a firm that has handled business for the NFL in the past. This has now turned into a circus and Courts would be wise to uphold the Commissioner’s prior decision, a decision deeply rooted in the authority granted to him by the Bylaws of the CBA and prior court decisions. Overturning the suspensions would make Commissioners in all sports wary of potential consequences when implementing player punishment.