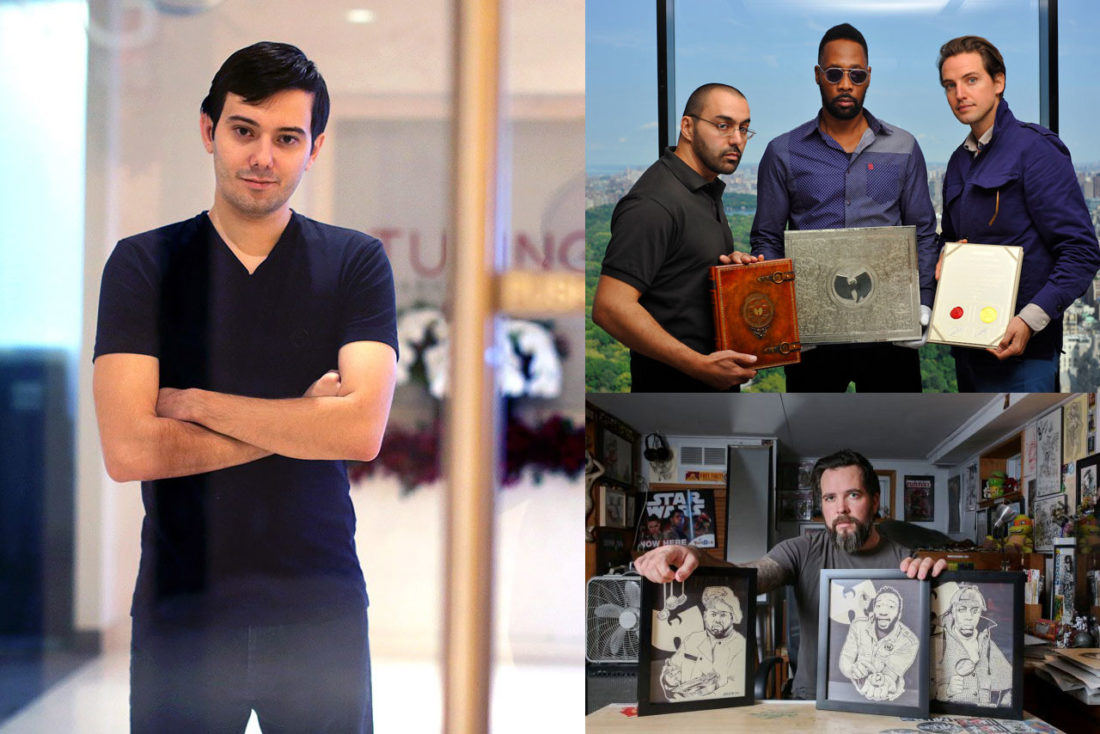 Long-time Wu-Tang Clan fan and portrait artist Jason Koza has filed a copyright infringement case in the Southern District of New York against members of the Wu-Tang Clan along with embattled former CEO of Turing Pharmaceuticals, Martin Shkreli in connection to the $2 million Wu-Tang Clan album he bought last year. Shkreli first came under fire for raising the price of the life saving drug Daraprim by 5,000 percent from $13.50 per pill to $750 per pill after buying the rights to the medication last year. Around the same time, the Wu-Tang Clan, announced their latest album “Once Upon a Time in Shaolin” would be sold to a single buyer who would be contractually prohibited from distributing further copies commercial for 88 years following the sale. Shkreli quickly jumped on the opportunity to buy the album to “keep it from the people.”

The complaint alleges that the packaging of the album includes a 174-page book with illustrated portraits of the clan members created by Mr. Koza. According to the complaint, around 2013-2014, Koza saw an announcement on the WuDisciples.blogspot.com website stating “Every Thursday we will be posting up pics of the Wu-Tang artwork from fans, artists, and aliens. If you have artwork you would like to share, please email us at: WuArtTats@gmail.com.” Koza then submitted digital images of his nine Wu-Tang Clan Portraits to the email and the works were posted on the website. The complaint states that the website “did not display any language or disclaimer granting the website a license for submitted works.”1 The complaint also alleges that Koza did not grant an express license to the website other than the implied license to display the works on the website.2 The complaint further details an email exchange from Wu-Tang Clan affiliated producer Mr. Azzougarh to Koza, first in an April 8, 2014 email mentioning the new album but with no explicit request to copy, distribute, or publicly display the portraits, and later in a January 31, 2016 email to Koza “tacitly admitting the unauthorized nature of his use of Koza’s work: ‘Hey Jason, I see we actually have been in touch before, but never completed. I thought we had. Let me know if you want to Skype discussing the use of your drawings.’”3 The final email came 2 days after Mr. Koza saw an article published in Vice.com that included photographs of the book that was included with the album revealing at least three of the portraits were reproduced in the book.4 On February 1, 2016, Koza filed copyright applications for all nine of his Wu-Tang Clan Portraits with the United States Copyright Office, who is currently processing the applications.5

Koza names all defendants as having infringed his copyrights by “copying, distributing, and publicly displaying his nine Wu-Tang Clan Portraits” without the necessary permission, license or consent.6 He names Mr. Diggs, founder of the Wu-Tang Clan, and Azzougarh as having infringed upon his exclusive “rights of reproduction, adaptation, and distribution” by copying the digital images submitted to the website, creating a work that incorporates the portraits, and selling the work to a third-party.7 Also named as infringing upon Koza’s exclusive right of distribution is Paddle8, the New York based online auction house that was hired by the Clan to sell/distribute the “Once Upon a Time in Shaolin” album ultimately to Shkreli, including the book that contained the portraits. Koza alleges Shkreli infringed upon his exclusive right of public display by allowing at least three of the nine portraits to be displayed to the public in a news article without the necessary permission or license. Defendants have yet to respond to the allegations in the complaint filed February 9 except for Shkreli who on March 11, 2016 through his counsel John A. Wait filed a letter to Judge Kimba M. Wood requesting a pre-motion conference.

Last month, Shkreli invoked his Fifth Amendment right against self-incrimination at a House Committee on Oversight and Government Reform hearing on drug pricing, and later tweeted that Congress lawmakers were imbeciles.8 He is currently also facing federal securities fraud charges. Koza is seeking damages plus profits stemming from the copyright infringement. Koza’s counsel Peter Scoolidge stated in a phone interview that Shkreli “didn’t need to know the illustrations were protected to be liable” since there is no intent requirement for copyright infringement.9

Maria Ariztizabal is a second year student at Fordham University School of Law and a staff member of the Fordham Intellectual Property, Media & Entertainment Law Journal.