In Brown v. Entertainment Merchants Association, the Supreme Court held that video games are entitled to First Amendment protections and struck down a California law prohibiting the sale of violent video games to minors.1 To restrict protected speech, the government must show a compelling interest in the proposed restriction and the restriction must be narrowly tailored to that interest 2. A compelling interest must address an “actual problem.” 3 In Brown, the Court found that no proof of an “actual problem,” without proof of a direct causal link between violent video games and harm to minors. 4

However, many still argue that violent video games are linked to violent behavior.5 Some studies have found that people who play violent games can be desensitized toward violence, and show increased aggression and decreased empathy.6 After decades of scientific research, the overall impact of violent games on real-world behavior is still debated.7 A study by Dr. Gregor Szycik was published this year revealing that playing violent video games long-term does not reduce empathy. 8

Even if Dr. Szycik’s study is right, it will not lead to less control over the sale of violent video games or impact game age ratings. Despite the lack of evidence of a causal link between video games and violet behavior, the video game industry has tried to appease concerned parents and legislators. The Entertainment Software Rating Board (ESRB), the video game industry’s self-regulatory body, provides guidance on the age-appropriateness of video game content.9 While Brown prohibited the government from making the sale of violent video games to minors illegal, retailers can still lawfully refuse to sell to minors. In fact, most national retailers refuse to sell M-rated games to consumers under 17.10 Retailer policies have been considerably effective. An FTC study shows that minors’ ability to purchase M-rated games been decreasing since 2000.11 In 2013 only 13% of minors in the study were able to purchase M-rated games from retailers.12 For online purchases, minors need a credit card. In the United States, a person must be 18 to get his or her own credit card. The credit card requirement serves as the retailer’s online version of age verification. The video game industry’s self-regulation often prevents the sale of violent video games to minors, achieving (at least in part) the result sought by the California regulation repealed by Brown.

The ESRB can also de facto ban video games from the market by issuing the rare AO (Adults-only) rating. Many stores won’t carry games rated AO and major console platforms, including Microsoft, Sony and Nintendo, do not allow the sale of AO games on their consoles.13 For instance, in 2005, Grand Theft Auto: San Andreas’s rating was changed from M to AO due to the “Hot Coffee” mod, leading several retailers to stop selling the game, including Best Buy, Target and Wal-Mart.14 Take-two released a patched version of the game which received a Mature rating. Retailers sold the patched version, but Take-two estimated that the incident cost $24.5 million.15 However, only three games received AO ratings for violence alone: Hatred, Thrill Kill and Manhunt 2.16 The possibility of an AO rating creates a ceiling for violence, as game developers know that the rating will essentially kill the game.

Social norms dictate video game regulation, not science. Unless society generally accepts that violent games do not lead to violent conduct or have detrimental impact on children, violent games will not get more lenient ESRB ratings. Customers under 17 should not expect retailers to be more lenient with M-rated game sales either. 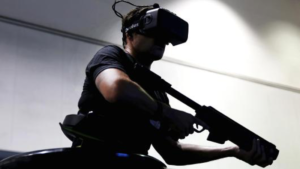 If research on the impact of violent video games hasn’t impacted government regulation of violent games (thanks to Brown) why is Dr. Szycik’s study relevant?

Dr. Szycik’s study and other studies on the impact of violent videogames matter because the fight over regulating violent video games may be regaining momentum.18 Fully immersive virtual reality games create an experience quite different from other video games.

“You pick up ammo by physically reaching to it and pulling it to your chest. Your health is displayed on your watch. Movements and interactions that require button presses in a flat game now require physical movements…Guns in virtual reality are three-dimensional objects. You have to make sure you’re lining up the front and rear sights to shoot straight…”19

New technology means new research, new fears, and new legislative efforts. The video game industry may have to fight for its right to self-regulate—again.

Ana Nigro is a second year student at Fordham University School of Law and a staff member of the Fordham Intellectual Property, Media & Entertainment Law Journal. She has a B.A. in Political Economy from the University of California, Berkeley.