Jeff Koons Loses in yet Another Copyright Infringement Case 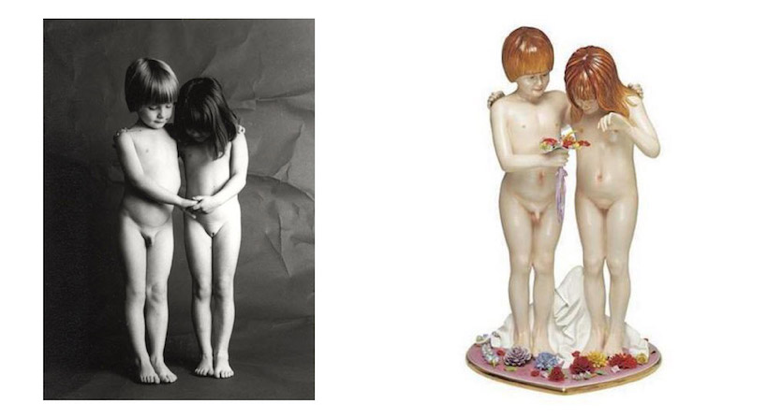 Jeff Koons Loses in yet Another Copyright Infringement Case

“ If the copy is an artwork, then what’s the original?”1

The recent ruling against contemporary artist Jeff Koons in a copyright infringement case revives the discussion as to the artistic value of appropriation art as well as the legal protection it deserves.

On March 9th, the High Court of Paris2 found that Koon’s sculpture Naked (1988) was an infringing copy of Enfants (1970), a work by the late French photographer Jean-François Bauret.3 Enfants, a black and white photograph of two nude children, was diffused as a postcard in 1975. While Koons argued his statute was an original work, the court held that Naked, which depicts two nude children with similar physical appearances holding the same pose, was plagiarism of the photograph. For the judges, the variations made by Koons “do not prevent the recognition and identification of the models and the pose”, which are “essential protected elements” of the initial photograph.4 Thus, while the court recognized the need to balance both “intellectual property and freedom of expression… considered two fundamental rights of equal eminence,” it ultimately concluded that Koons had unsuccessfully justified his need to use the image without Bauret’s authorization.5

This decision is the latest in a long line of rulings in which the ability of courts to strike a fair balance between the interests of copyright holders and appropriation artists has been challenged. If by definition appropriation art involves infringing on someone else’s copyright, the only way for an appropriation artist to legally use a copyrighted work without the owner’s consent is under the fair use defense.6 How do courts determine whether the use of copyrighted subject matter is “fair”? Even though the four fair use factors must be included in the court’s analysis, in Campbell v. Acuff-Rose Music, Inc.,7 the Supreme Court emphasized the first factor, and specifically “transformation”, as being the primary indicator of fair use.8 When taking portions of preexisting works, appropriation artists must ask themselves the following: Is the material taken from the original work being transformed by an added new expression or meaning?9 Was value added to the original by the creation of new information, new aesthetics, new insights, and understandings?10

Even so, if transformation has been put at the heart of the fair use defense, the lack of a clear-cut standard (expected difference in size, medium, color) has left courts to analyze transformativeness on a case-by-case basis. By way of illustration Koons – who is no novice to such lawsuits – lost each of the copyright infringement claims brought against him in the 1980s,11 yet finally won a case in 200612 “based on the transformation of the appropriated work.”13 Thus, this raises the question as to whether a different ruling would have been reached had the present lawsuit been brought in the United-States. Ultimately, without a clearer explanation of when appropriation art will be considered transformative (enough), its legality remains hazy.14

Céleste is an LL.M. student specializing in Intellectual Property and Information Technology Law.