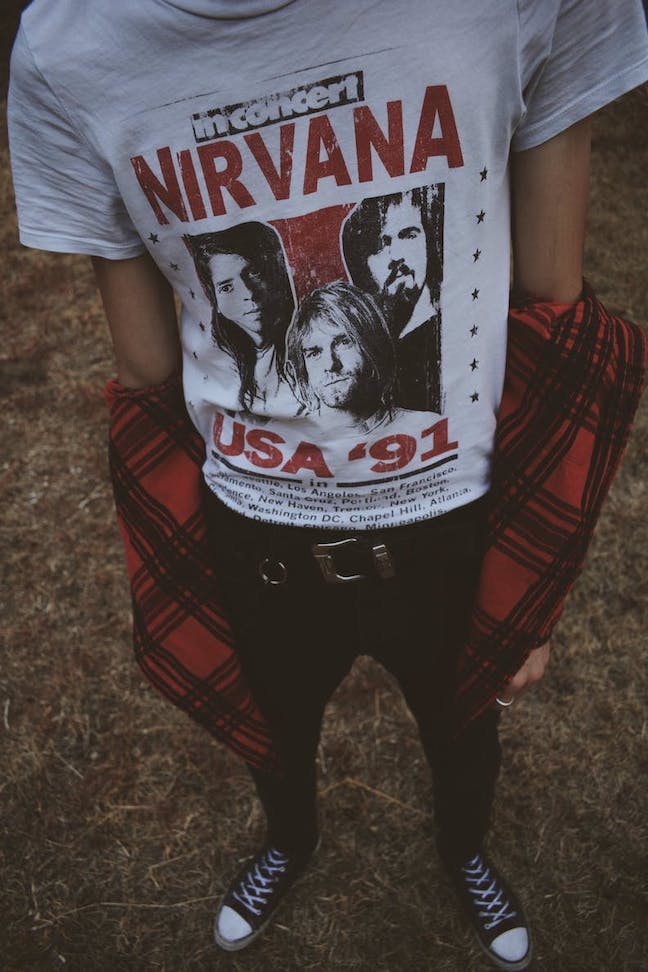 It’s impossible to ignore the return of the ‘90s in fashion. From tiny sunglasses and dad sneakers to fanny packs and scrunchies, the ‘90s are all around us.1 Perhaps in an effort to capitalize on the ‘90s nostalgia, in November 2018, the designer Marc Jacobs reissued the infamously grungy collection he originally designed in 1993 for Perry Ellis.2 Titled “Bootleg Grunge Redux,” Jacobs’ reissued collection includes black sweatshirts, t-shirts, and socks printed with the word “HEAVEN” above a squiggly yellow smiley face.3 Soon after the collection’s debut, Nirvana L.L.C. sued Marc Jacobs International L.L.C for copyright and trademark infringement.4 The suit also named luxury department stores Saks Fifth Avenue and Neiman Marcus as defendants for selling the allegedly infringing merchandise.5

Nirvana’s complaint alleges that the smiley face in Marc Jacobs’ collection copies Nirvana’s famous logo.6 The Nirvana smiley face has been printed on band merchandise for decades7, and Nirvana has licensed the work to major retailers like Target and Urban Outfitters.8 Nirvana’s logo was created by the band’s front man, Kurt Cobain, in 1991, and the copyright was registered by Nirvana L.L.C. in 1993.9 Nirvana’s copyright registration contains three elements: (1) a smiley face with Xs for eyes and a tongue sticking out of a squiggly mouth, (2) the word “Nirvana” printed in all caps above the smiley, and (3) the phrase “flower sniffin kitty pettin baby kissin corporate rock whore” on the back of the shirt.10

The court ultimately denied the motion to dismiss, and discovery is set to begin.13 As litigation continues, Marc Jacobs’ third response to the copyright claims will likely be a center of attention. Marc Jacobs’ design omits the “flower sniffin” phrase entirely, swaps “NIRVANA” for “HEAVEN” and changes the eyes in the smiley from Xs to “M” and “J.”14 As Marc Jacobs argues, two of the three elements from Nirvana’s copyright registration are absent, and the third element is changed so as not to rise to the level of similarity needed for copyright infringement.15

In the 9th Circuit, courts apply a two-part “extrinsic” and “intrinsic” test to determine whether two works are substantially similar.16 The “extrinsic” test is objective, assessing the “similarities of the two works, focusing only on the protectable elements of the plaintiff’s expression.”17 The “intrinsic” test is subjective, whereby a trier of fact asks whether “the total concept and feel of the works” are substantially similar.18 By focusing on the omitted copyrighted elements and the differences between the two smiley faces, Marc Jacobs argued that Nirvana’s complaint fails the extrinsic test.19 Courts apply the extrinsic test at summary judgment and leave the intrinsic test for a trier of fact.20 If the suit progresses to trial, it is difficult to imagine how Marc Jacobs can defeat the intrinsic test given the immediate and distinct recognizability of Nirvana’s logo.

Lastly, as the joint discovery plan notes, Marc Jacobs has plans to depose the four principals of Nirvana L.L.C.: Courtney Love, Frances Bean Cobain, Dave Grohl, and Krist Novoselic.21 These depositions will likely focus on the issue of copyright ownership.22 However, given Courtney Love’s contentious relationship with the surviving Nirvana band members23 and her more recent support of Marc Jacobs24, it will be interesting to see how these depositions shake out.

Eileen Ceconi is a second-year J.D. candidate at Fordham University School of Law and a staff member of the Intellectual Property, Media & Entertainment Law Journal. She holds a B.S. in Biological Engineering from Cornell University.