And now there is a study that proves it.

From InfoJustice: “The Copy Culture survey was sponsored by The American Assembly, with support from a research award from Google.  The content of the survey and its findings are solely the responsibility of the researchers.  The U.S. survey was conducted by Princeton Survey Research Associates International. The results are based on interviews on landline and cellular telephones conducted in English with 2,303 adults age 18 or older living in the continental United States from August 1-31, 2011. For results based on the entire sample, the margin of error is plus or minus 2 percentage points.” 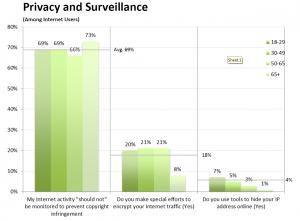 For more on the findings, read the full report here.

Amy Dunayevich is a third year student at Fordham University School of Law and is Fordham IPLJ's Technology Editor. Originally from the Detroit suburbs, Amy spent two years in the Peace Corps living in Eastern Europe without running water but with high-speed internet. Amy now lives in Brooklyn with her little black pug Roxanne. Although pursuing a career in the public interest, Amy finds intellectual property law to be extremely relevant, interesting, and important.