Critics, linebackers, and Mark Sanchez are not Tim Tebow’s only competition.

Tim Tebow has already found his name at the center of several hotly contested intellectual property disputes.  Before Tebow even received his new playbook from the New York Jets, a controversy erupted in federal court in Lower Manhattan between sports merchandise moguls Nike and Reebok over the right to sell Tebow Jets jerseys.  Not long after, three New Yorkers battled over the trademark rights to the phrase “Timsanity,” a play on the viral phrase “Linsanity” inspired by Knicks sensation Jeremy Lin.  Most recently, Tebow has sent his own lawyer into the fray to challenge two of his fans for trademark rights to the term “Tebowing,” a pop-culture craze named after Tebow’s on-field, one-knee prayer stance. 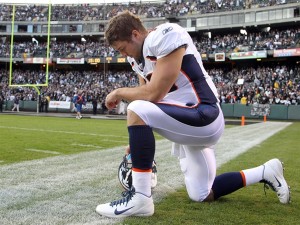 Deserved or not, the Jets’ newly acquired backup quarterback is a media darling, an international sensation, and one of the biggest names in professional sports.  During the 2012 season, the only jersey that sold more than Tebow’s Denver Broncos shirt was that of league MVP Aaron Rodgers, marking the second straight season that sales of Tebow jerseys ranked in the top three.  Reebok International Ltd., who has been the exclusive licensor of NFL merchandise for the past ten seasons, was a big beneficiary of Tebow’s popularity.

Reebok’s deal, a 10-year, $300 million contract signed back in 2000, expired on March 31, 2012.  Nike immediately succeeded with a five-year contract, figured to be worth upwards of $150 million, for the exclusive supplying rights to uniforms, base layers, sideline gear, and fan apparel.  But when Tebow was traded to the Jets on March 21, Reebok attempted to swoop in for one last push by selling 6,000 Tebow-Jets jerseys and 25,000 T-shirts. 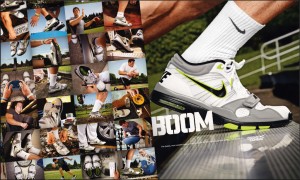 Nike immediately sued to enjoin Reebok from selling the merchandise, alleging that Reebok “misappropriated publicity rights, interfered with business relationships and unjustly enriched itself” by failing to get the quarterback’s permission for the product launch.  Further, Nike claimed that Reebok’s tactics were an impermissible attempt to capitalize on a “”unique and short-lived opportunity” that should belong to Nike.  Judge Kevin Castel of the S.D.N.Y. granted the injunction, criticizing Reebok’s midnight effort to sell apparel for players changing teams (he also cited the sale of jerseys of Tebow’s Denver replacement, Peyton Manning), and finding that Nike had shown a “probability of success” in its pursuit to permanently stop Reebok from selling Tebow-Jets jerseys.  The two sides eventually reached a “mutually agreeable resolution”, as Reebok removed all of its Tebow-Jets merchandise from stores.

The battle for Tebow is not confined to the corporate arena.  Three New Yorkers (all of whom, incidentally, are Giants fans) are vying for the trademark rights to the phrase “Timsanity.”  Daniel and Christian Perez, a pair of brothers from Brooklyn, filed their applications with the US Patent and Trademark Office one day after Frank DeGrim, a hedge fund manager from Manhattan.  The men all see an opportunity to make and sell Tebow merchandise in a very lucrative New York sports market.  Noting that the “typical test is sight, sound, and meaning,” trademark lawyer Kurt Anderson says that neither application may stand a chance due to the phrase’s obvious similarity to “Linsanity.”  Anderson notes that should Tebow challenge the trademarks, the one saving grace for the opportunistic New Yorkers may be the generic nature of the name “Tim.” 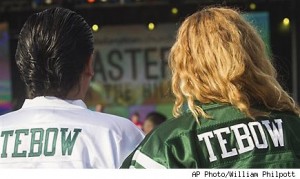 Earlier this month, Tebow finally sent his lawyer into the fray in an effort to preserve his own brand.  Jared Kleinstein, a 24-year-old Broncos fan from Manhattan and creator of “tebowing.com,” claims that he came up with the phrase. (Yeah,okay.)  Kleinman’s application to the US Patent and Trademark Office has been met by a letter of protest from Tebow’s attorney, Anthony Keats, who claims that the trademark should be awarded to nobody other than Tebow because of the confusion that would be created concerning Tebow’s connection to the products sold.  Another application, submitted to the USPTO by Jason Vollmer of Jacksonville Beach, Florida, has been denied due to a “false connection to a living individual.”

Even though Kleinstein filed his application on October 27, 2012, nearly two months before Tebow’s attorney submitted his application, intellectual property experts feel this fact is of little significance to the USPTO.  Even if his dubious claim that he came up with the expression is true, trademark attorney Keith Weltsch explains, “he’s still playing off the name and fame of Tim Tebow…he’s going to have a difficult time trying to establish there is not a false association.”

All of this for a backup quarterback.

Brian Roe is a second-year law student, admitted Tebow critic, and life-long, suffering Jets fan. He is interested in the way that the law interacts with all facets of sports, and longingly awaits a Jet Super Bowl run.